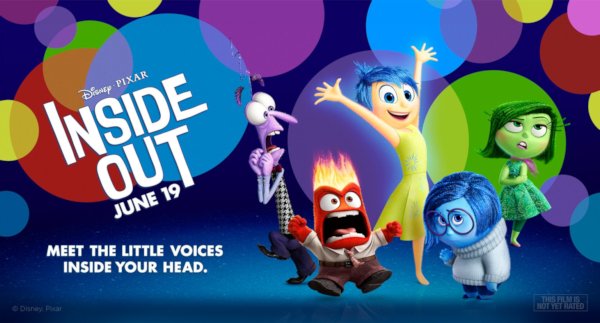 Pixar’s latest offering, Inside Out, is true to what we have come to expect from this highly successful film studio. It’s delightful, it’s creative, it’s funny, unusually insightful, and there’s nothing unnecessarily crude or risqué.

Inside Out is the story of a pre-teen girl named Riley, as told from the perspective of her emotions, who are personified as an interesting assortment of characters. Through the story we learn how important this whole assortment of emotions really is, even those which we tend to avoid – so relevant in a society that tends to overvalue happiness and fun.

One criticism of the film I have encountered is that it is overly simplistic. That is true, but that needn’t distract the viewer from the screenwriters’ main point. Of course human beings have more emotions than the five in Riley’s head. But is it necessary in any story to achieve technical accuracy in order to make a legitimate point? As a fable, which I think is the best way to describe Inside Out, it is not attempting to address every area of life or provide an extensive psychology. It has a simple, but important, lesson to share, and it would be a shame to miss out on that lesson due to a concern over technicalities.

Don’t get me wrong. I take story telling very seriously. I believe God has revealed himself through a big story of epic proportions as recorded in the Bible. Every life, all of creation in fact, is part of that story. The stories we produce, be it grand classic literature, TV sitcoms, blockbuster films, or even the jokes we tell either reflect God’s story or not. It doesn’t matter if our stories are fact or fiction. They are either in keeping with life’s realities from God’s perspective or not. In actuality, our stories are generally a mix of God’s truth combined with all sorts of other things. Some are designed to purposely lead the audience away from truth and goodness, others unintentionally so.

Since the Bible is our only absolutely dependable source of truth, we need to stop and think about the stories we encounter in order to determine to what extent they fall in line with Scripture. Otherwise we may find ourselves embracing and being influenced by false and possibly destructive views of life. And as followers of Yeshua, our call to disciple the nations must include critiquing popular culture in order to help our neighbors discover and embrace God’s ways.

Regarding Inside Out, the central lesson of learning to value our array of emotions is important enough and is communicated well enough for me to recommend it to you and your whole family.

That said, there is at least one key assumption that is foundational to the film that needs to be addressed. Many people may take this for granted, but from a biblical perspective it is not true. In the story, the emotions control Riley’s responses and reactions. That there is no explicate reference to God and other spiritual forces might be expected, but there is no connection made between Riley’s emotions and her will. Her responses to life’s circumstances are produced by nothing but her emotions alone.

I don’t know if it was the writers’ intention to give us this impression, since the message is not that we should give ourselves completely over to our feelings. If anything, it’s that we should strive for emotional balance in life, which is a good thing. But how to achieve that balance is not addressed in the movie.

According to the Bible, human beings are not preprogrammed machines. Good and evil are real forces at work both within and upon all of us. Temptation and demonic evil, while at play upon the stages of our minds, are outside forces that should never be confused with our personalities. Godliness also originates from the outside as its roots are in God, not our brain cells. The believer especially, lays claim upon God’s own Spirit residing in us doing a work apart from our physical mechanisms. What it is that allows a person to give in to evil or to follow goodness may be impossible to fully understand, but it certainly requires a greater treatment than what we find in Inside Out.

However emotions really work, God did not give them to us to control us. They are just a few of the aspects of humanness he designed as part of his wonderfully intricate image indelibly stamped upon all of us. Don’t confuse the multitude of feelings you experience every day with who you are. Whether or not you regularly experience a battle of emotions within you or you are one of the few who are emotionally balanced, your feelings are not you. You are called to be a child of God, whose identity can only be found in your Creator. You don’t have to be a slave to your emotions. If the Spirit of God lives in you, your emotions will serve you as you serve God.

One thought on “Pixar’s Inside Out – a Biblical Perspective”